The Science of Peace

Progress in theoretical physics during the past quarter century has led to a progressively more unified understanding of the laws of nature, culminating in the recent discovery of completely unified field theories based on the superstring. These theories locate a single, universal, unified field of intelligence at the basis of all forms and phenomena in the universe. Millions of times more fundamental and more powerful than the nuclear force, the unified field is the ultimate source of the order displayed throughout the vast universe. Click on chart to enlarge Maharishi’s Vedic Science and Technology of Consciousness is a Unified Field-Based Approach to Peace because it constitutes a direct technological application of the unified field. Because it works at the deepest, most powerful and holistic level of Natural Law, its effects are pervasive and inescapable. It can easily overpower—and effectively disarm—conventional technologies of offense based on the electronic, chemical, biological, or nuclear levels. Yet it is inherently safe, despite its power, because it is based on the application of a completely holistic level of Natural Law. The Unified Field of Consciousness Theoretical and empirical investigation reveals that the unified field is fundamentally a field of consciousness. The fundamental qualities of the unified field—intelligence, dynamism, and self-awareness (i.e., “self-referral,” the non-Abelian property of self-interaction)—are the defining characteristics of consciousness. Extensive published research further demonstrates that human consciousness can directly access and experience the unified field in the most expanded state of human awareness, known as “pure consciousness.” (See chart below.) This experience of the unified field—pure consciousness—constitutes a fourth major state of human consciousness, physiologically and subjectively distinct from waking, dreaming, and deep sleep. This experience is marked by the onset of global EEG coherence and increased alpha power, indicating maximum orderliness of brain functioning and utilization of the total brain. Click on chart to enlarge This fourth state of consciousness is universally accessible through specific, highly developed technologies of consciousness from the Vedic tradition of India. These technologies—the Transcendental Meditation program and advanced TM-Sidhi program of Maharishi Mahesh Yogi—are the most widely practiced and extensively researched technologies in the world for the full development of human potential.

Regular experience of the unified field through the Transcendental Meditation program has been shown to dissolve deep-seated stress in the individual, bringing marked reductions in hypertension, stroke, heart disease, and other stress-related illness. When practiced collectively in groups, this same program has been shown to effectively reduce societal stress and tensions, causing associated reductions in crime and social violence, and an upsurge of peace and positivity throughout the population.

Specifically, published research confirms that collective practice of the Transcendental Meditation and TM-Sidhi programs by groups of several hundred to several thousand trained experts quickly neutralizes acute societal stress—including the ethnic, religious, and political tensions that fuel violence and conflict. Violence and conflict are thereby averted as tensions are calmed and as the enmity in an adversary is naturally defused. From the perspective of physics, such groups of trained, peace-creating experts collectively accessing and stimulating the unified field generate powerful waves of unity and coherence that permeate the collective consciousness of the whole population.

The immediate, practical result is markedly reduced crime and social violence, and improved positive trends throughout society. (See Scientific Verification.) This phenomenon of increased coherence and peace throughout society was first reported in research published in 1976, which found that when 1% of a community practiced the Transcendental Meditation program, the crime rate dropped by an average of 16%.

This phenomenon was named the “Maharishi Effect” in honor of Maharishi Mahesh Yogi, who first predicted it in 1960. This term now includes the influence generated by group practice of the advanced TM-Sidhi program, through which even the square root of 1% of a community is sufficient to create measurable changes in social trends. The reduction of social violence, terrorism, and war through group practice of Maharishi’s Transcendental Meditation and TM-Sidhi programs is the most extensively researched and thoroughly established phenomenon in the history of the social sciences.

Such group practice is the cornerstone of the Global Peace Initiative.

Implementation The simplest way to establish a group of 8,000 trained experts in Maharishi’s Unified Field-Based Approach to Defense is within a large university or college. Every country has hundreds of thousands, or even millions, of students. With proper training, a group of 8,000 students can become a powerful peace-creating force, bringing security and invincibility to the nation. It is only necessary to add to the curriculum a period, each morning and evening, for collective practice of the Transcendental Meditation and TM-Sidhi programs.
Extensive published research on the application of these programs in education confirms that, in addition to the powerful effect of peace and national coherence created by these programs, the students individually benefit profoundly, graduating as highly productive, enlightened leaders of society.
Among the many documented benefits are significant longitudinal increases in intelligence (IQ); increased creativity; improved learning ability, memory, and academic performance; increased psychological stability, self-confidence, and emotional maturity; and improved moral reasoning.
To safeguard national security and invincibility on a stable basis, it is important to ensure the continuity of this coherence-creating group. The group should be protected against political turnover and changing policies caused by elections. Ideally, therefore, the peace-creating group should be permanently endowed, and placed in a secure location. In this location, a branch campus of an existing government university can be built, or a new university can be established—a University of Peace.
Such a protected environment, along with a regular, ideal daily routine, is most conducive to the highly specialized training the students will receive—training that develops a very refined quality of consciousness, with the ability to access and explore the unified field in the most silent, expanded state of awareness.
By protecting this environment and educational training, a government will simultaneously protect the nation’s security and invincibility. Alternatively or in addition to this student coherence-creating group, there may be many large corporations with over 8,000 employees.
By training company employees in the programs of Maharishi’s Vedic Technologies of Peace, any large corporation can create national security and invincibility. According to published research, such a business will also benefit greatly from increased employee productivity, improved employee health and reduced health costs, greater economic stability in the country as a whole, and increased corporate profits. 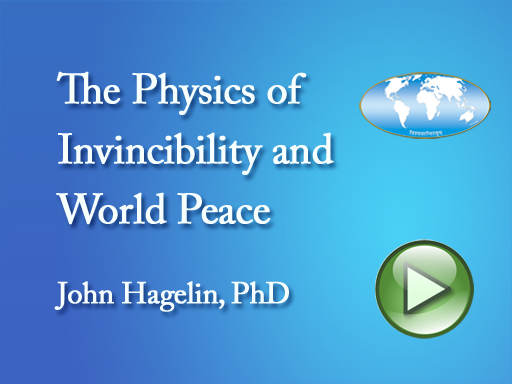