Time-Tested, Scientifically Verified Solutions
for the Health Problems of Our Time

Ayurveda: The Pursuit of Health, Happiness and Long Life
through Prevention-oriented Health Care

At the Congress, 300 delegates from 55 countries, including research scientists, doctors, and pharmacologists with expertise in Western and Ayurvedic medicine discussed scientific evidence on preventing disease, promoting longevity and alleviating specific conditions with Ayurveda. 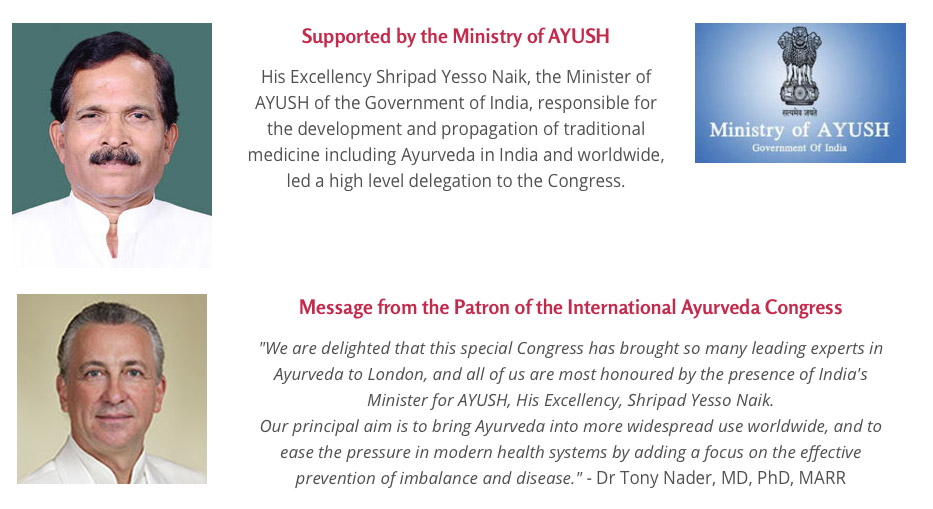 British MP Virendra Sharma announced to the Congress that an ‘Early Day Motion’ passed in the UK Parliament last October called for the integration of Ayurveda into the National Health Service. The motion is now supported by 30 members of the Houses of Commons and Lords. Mr Sharma is Chair of the ‘All-Party Parliamentary Group for Traditional Indian Sciences’, and was joined by Amarjeet Bhamra, the Secretary of the group.

Dr. Jose Saraiva Felipe, Former Minister of Health of Brazil, and now Secretary of the Interministerial Commission of Planning and Co-ordination, came to the Congress as part of a high level Latin American delegation. Dr Filipe said that the Congress of Brazil had recently passed legislation making Ayurveda and other natural health approaches available throughout the nation’s public health centres.

The Congress heard numerous top-level presentations on the application of Ayurveda to relieve major disorders, with remarkable results. These included summaries of Ayurvedic strategies to improve Type 2 diabetes and coronary artery disease, the effect of Ayurvedic approaches to optimize brain health, and personalized strategies for effective weight management; as well as the striking relevance of Ayurveda’s mind/body classifications and personalized approach to the emerging sciences of genomics and epigenetics.

At the end of the Congress, leaders of the three host Ayurvedic organizations, acting on behalf of the whole Congress, signed a Resolution recommending 10 action points to promote Ayurveda on a global scale.

The points include working with national, regional and local authorities in each country to support the application of Ayurvedic principles in daily life.